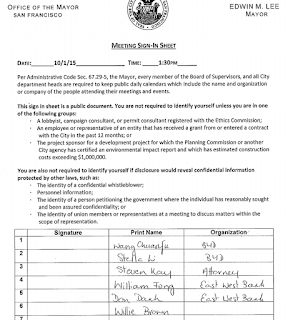 Earlier this month, we received Mayor Ed Lee's calendar and sign-in sheets for his meetings at City Hall and blogged about an October 1, 2015, meeting where former mayor and SF Chronicle writer and potential lobbyist Willie Brown was present. The sign-in sheet omitted his organization, unlike every other attendee.

We say Brown may be a lobbyist for the paper because part of our complaint this week to the Ethics Commission asks them to investigate who exactly he presented at the meeting.

Amazing that none of the dozens of folks on Mayor Lee's staff has a clue about Brown's organization. 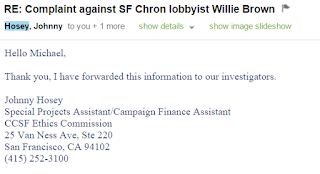 All of this info and emails from the mayor's staff to us were included in our Ethics Commission complaint, which is against the current and former mayor. The commission acknowledged receipt of the complaint. Now, let's see how they process it and if they'll investigate Lee and Brown.
Posted by Unknown at 11:40 AM