One of the least known San Francisco advisory boards that oddly rarely shows up on the public, press or social media radar, given its purview, is the Local Coordinating Homeless Board. Considering the various homeless problems and thousands of folks living on the streets, we would expect the LCHB to have a bigger presence and more people aware of it.

Mayor Ed Lee address the Monday, February 1 meeting of the LCHB at about noon and since the board meets at an auditorium on Otis Street and not at City Hall, the meeting was not aired on SFGovTV.

To learn what transpired, we filed a public records request with the LCHB for their preliminary minutes and sign-in sheets. 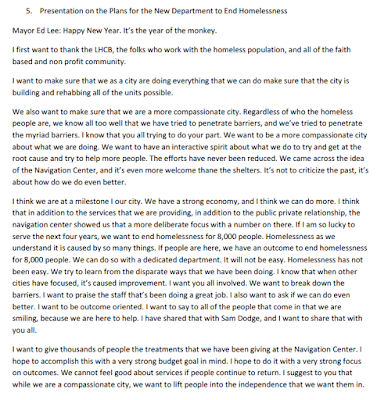 What the mayor said was basically a whole lotta nothing. He blathered on, as is his usual custom of public speaking, in platitudes and used many touchy-feeling phrases. 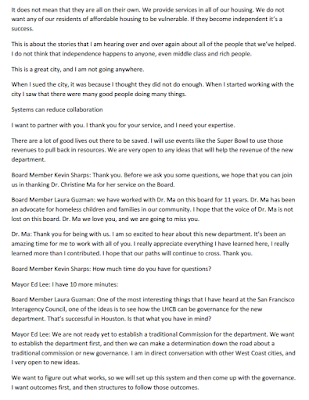 Details about his plans for a Department to End Homelessness weren't presented. He did assure the assembled crowd from Homeless Inc that he was listening to them and would consider their ideas and suggestions. Specifics on anything to do with this new City department, additional funding for more low-income and affordable housing, addressing the needs of homeless folks living in Tent City and nearby residents and businesses, presenting the public with a timeline of when the department will be created and operational, were missing from Mayor Lee's talk.

It's not surprising the mayor wasn't zapped and no one shouted at him to deliver tangibles. The sign-in sheets reveal dozens of City employees and representatives from Homeless Inc nonprofits that depend on the City for funding, hardly a crowd to seriously challenge Lee.

In the name of open govt, now is the time for the LHCB leaders to move their meetings to City Hall and air them on SFGovTV. That won't do much to force Mayor Lee to finally develop and implement a plan addressing homelessness, but at least we'll have a better idea of what the City and Homeless Inc discuss when they get together.
Posted by Unknown at 12:46 PM