From the Associated Press (via KPIX/CBS and The Guardian), to the Bay Area Reporter, Bay City News (via KRON), and the SF Examiner, all omitted the price-tag for the San Francisco Police Department's new public relations effort Not on My Watch.

Very curious that the AP also omitted the name of the former television journalist who produced the 10-minute video for the campaign, which is all about police officers not tolerating racism, sexism, homophobia and other isms and promoting acceptance of diverse communities. 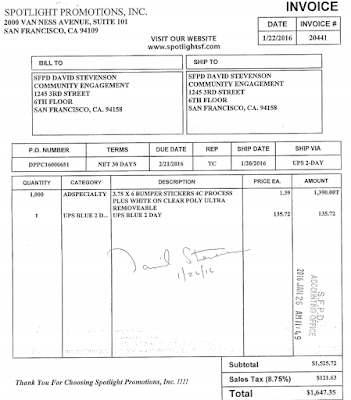 Thanks to a public records request, I've learned the name of the former reporter is David Stevenson who used to work for KTVU. An invoice shows the SFPD spent $1,600 on bumper stickers and they were shipped to Stevenson at police headquarters. 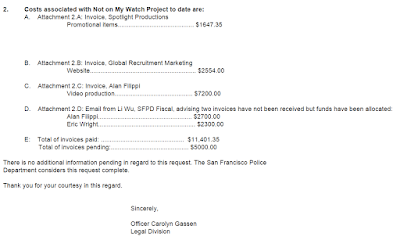 The total cost, so far, for Not on My Watch comes to $16,400, according to an email from Officer Carolyn Gassen of the department's legal division.

Spending $16,400 in taxpayer dollars for this public relations campaign should be reported by legacy media and disclosed on the Not on My Watch web site. Let's make it easy for citizens to follow the money!