Monthly calendars of select New York City Council members eventually will be published here, but for the time being we share just one member's calendar data. 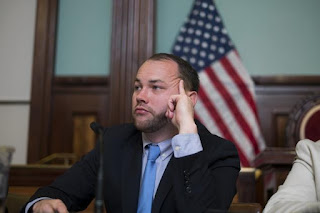 (Much info is impossible to read due to several generations of copying. The remainder of her calendar data for 2015 should be released soon. She also failed to note, in both batches of calendars, in every instance where an event or details are completely redacted, under what provision of exemptions in NYC govt transparency law allowed her to withhold info.)

(After requesting a readable version of her 2015 monthly calendars, the FOIL appeal officer for the City Council, Patrick Bradford, sent us Mark-Viverito's heavily redacted calendar for this period.)