We've made three Freedom of Information Law requests to the New York Police Department and are not surprised at the absolute commitment of the department to thwart every step of ours to obtain public records.

The NYPD does not accept FOIL requests via email, you must provide them with a mailing address, acknowledgement letters lack the subject of files requested and every exemption to withhold records is invoked. 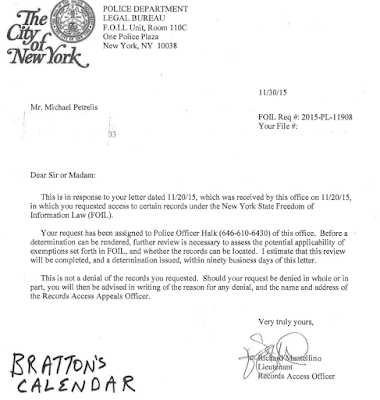 Our request was made on November 20, 2015, for Bratton's calendar from January through October of last year and this November 30th reply acknowledges receipt of our letter omitting the topic at hand. Since then we've heard nothing.

The NYPD said it needs ninety-days to reach a determination and it's been about sixty-days since they last communicated with us.

We also requested the NYPD's FOIL logs and received a similar letter and non production of public records. 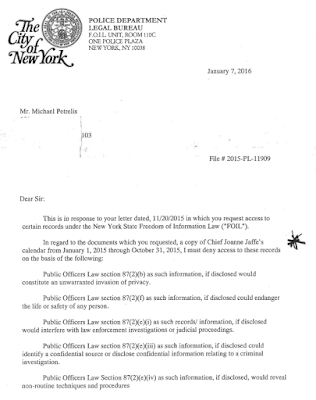 No surprise here. Our November 20th request for the calendar of community liaison deputy chief Joanne Jaffe was denied as explained in this January 7 letter that recently arrived via snail mail. Various excuses are given as to why not a single day of Jaffe's schedule can be released. 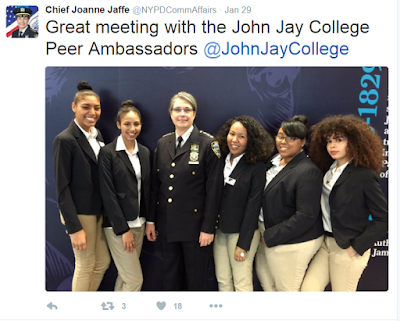 While the NYPD invokes potential security and investigation concerns for withholding Jaffe's entire calendar, no such concerns prevent her from daily tweeting about her meetings, who she spends time with carrying out her duties and then sharing photos of the events.

Seems the police are contradicting themselves here. To follow Jaffe's duties and schedule, read her Twitter feed.

We have filed complaints with the NYPD inspector general's office and the nominally independent Civilian Complaint Review Board. We'll update when each entity gets back to us.

Our request from November 20, 2015, for the Freedom of Information Law request logs from January through October of last year brought us CD yesterday with responsive records which are posted here. 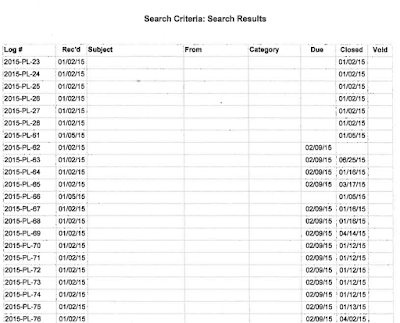 As you see, the columns for subject, from whom the FOIL request came and what category of records the NYPD assigned to it are redacted. Thousands of entries are totally blank.

In their letter accompanying the CD, the NYPD stated, "Redactions have been made to the document in that the release of information would represent an unwarranted invasion of privacy [according to the FOIL statute, section 87.2(b)]."

We've filed an appeal with the department, and lodged complaints with the NYPD inspector general and the Civilian Complaint Review Board arguing that the police are erroneously using section 87.2(b) for such blanket withholding of public records.

It's our belief the NYPD is violating open govt law, that not every member of the public and press who made a request to this public agency for public records granted the police the ability to deny access to crucial parts of the FOIL logs.

Let's see how each entity we've written to responds.

The NYPD sent us a CD with five-months (Jan - May 2014) of responsive calendars for Commissioner William Bratton that arrived via snail mail yesterday.

Our November 2015 Freedom of Information Law request was for his calendars from January through October of last year, not 2014. Mere incompetence or willful flouting of open govt laws?

The Big Apple's police force needs to improve its commitment to complying with FOIL requests, goes without saying. We've filed an appeal with the department for the correct 2015 Bratton schedules requested.

Even though the NYPD FOIL Unit has goofed, we're still, of course, sharing what was released.