We were curious if she listed any LGBT or HIV/AIDS meetings on her calendar, so we filed an Access To Information request. ATI is equal to FOIA. There is no mention of the prime minister holding a meeting delving into those subjects, but her calendar overall is skimpy on what matters were on the agenda of her various events. No names of well-known gay or AIDS advocates appear on her calendar for 2015, but there may be names of such individuals that are not known to us but maybe human rights or health advocate leaders in Jamaica. 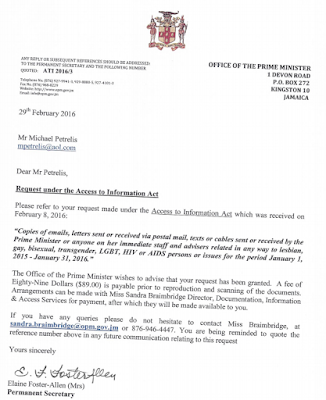 
"First, please consider using your scanner function on your phone/fax/copier/scanner office machinery. We're sure your office is able to scan paper records without running up a large fee to the public and believe Jamaican open govt practices would be greatly served if you took this option.

"Second, the public records we seek are for non-commercial purposes only and ask that you waive this fee, if you won't grant our above request.

"Third, we'd like to know how many pages of records have been located, what the $89 fee is for exactly, and how do we know if each page or record is not blank or copies of long strings of the same emails?

"Let's discuss easy and no-cost ways you can provide me with responsive records and maintain your commitment to transparency. Thanks."

When we hear from the Prime Minister's Office about scanning the documents or waiving the fee, we'll update this page.

Our appeal to the Prime Minister's Office to simply scan the responsive records was granted and we avoided the $89 fee. Many of the pages released are letters from homophobes urging intolerance toward LGBT people, while about 60-pages are documents from the Jamaica Forum for Lesbians, All-Sexuals and Gays organization.

FYI, our request was for all of the ex-PM's emails about LGBT persons or AIDS issues from January 2015 through the end of January 2016. 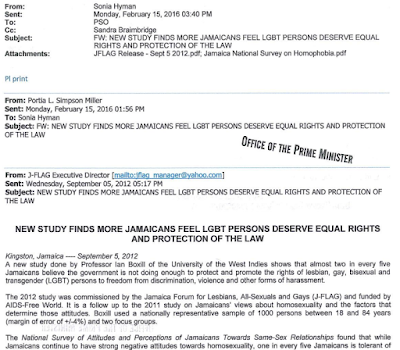 Of note was a J-FLAG release from September 2012 that appears to have received attention from former Prime Minister Portia Simpson-Miller's office in February 2016. 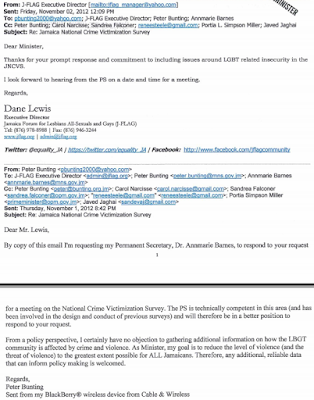 We were surprised and pleased a November 2012 email exchange between the executive director of J-FLAG, Dane Lewis, and National Security Minister Peter Bunting was released since it's outside the period for which we sought public records and shows interest on the government's part to engage with Jamaica's LGBT advocates. 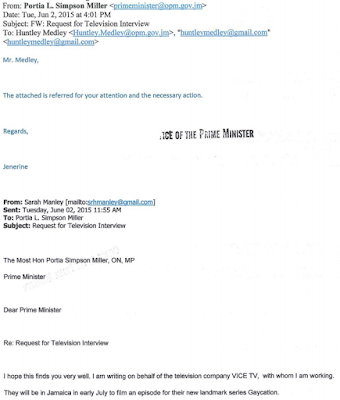 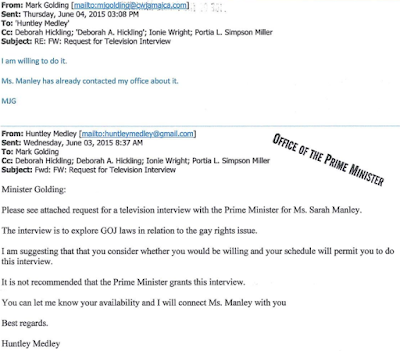 Director of communications for Simpson-Miller, one Huntley Medley, wrote it "is not recommended that the Prime Minister grant this interview."

The Minister of Justice, one Mark Golding, told the PM's Office that he was willing to conduct the interview on behalf of the Jamaican government.

Here are the entire three responses in their entirety that we received last week from the PM's Office: