The Obama Administration deserves applause and attention for voluntarily releasing visitor logs, and quickly too, making the information accessible to the public without the burden of having to file a FOIA request. Check out their search engine. Records of visitors of interest to us will be posted on this page. 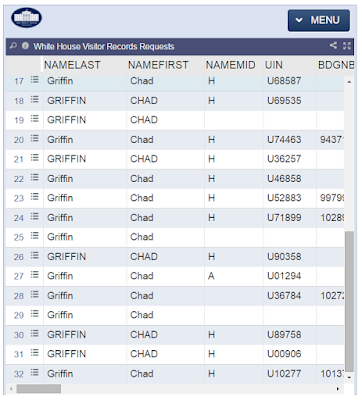 Chad Griffin, the executive director of the Human Rights Campaign has visited the White House thirty times from February 2011 through December 2015. So many visits, in my view, quite abundantly equals another example of the establishment and privilege status of HRC.

Nearly two years ago, on May 12, 2014, we filed a FOIA request with the William J. Clinton Presidential Library for copies of their holdings pertaining to Griffin when he worked for the Clinton Administration in the 1990s.

Part of the reason for the long delay in reviewing and potentially providing us with the records is that the former president and his advisers are allowed to assess all FOIA requests and what is opened for public inspection. This info was shared with us back in 2014 and we feared a years-long wait for records. 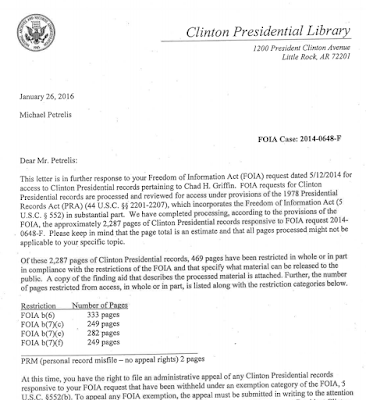 Due to a protracted review process stretching too long, we now know there are 2,000-plus releasable pages. The library asked for payment of $1,500 or so in copying fees and we've appealed requesting a fee waiver, and explain that all documents released to us will be published here at no cost to view them. 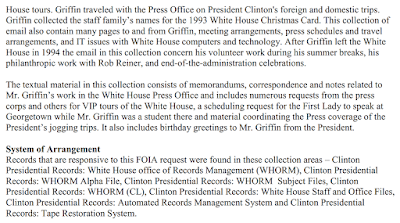 Here are the details on what the library in Little Rock holds on Griffin and details about some of his duties during the first two Clinton Administrations. There may be a third if Hillary Clinton is elected as president in the fall.

Click here to read the two-page letter to us, along with the four-page memo about the Griffin holdings. When we hear back from the National Archive about our fee waiver request, we'll update this post.