We filed a public records request for Mayor Ed Lee's calendar, after reading in the San Francisco Chronicle about his meetings with Chinatown powerbroker Rose Pak and Sup. Aaron Peskin.

Neither meeting was listed on the mayor's calendar page and that's the basis of our Sunshine Ordinance Task Force complaint. 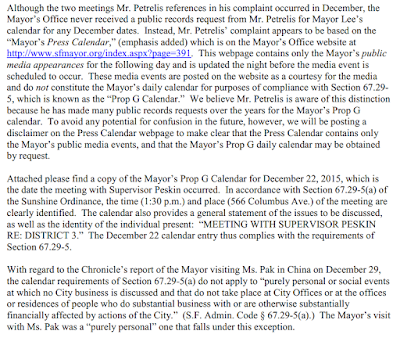 In their reply to the SOTF, the mayor's staff state he actually keeps two calendars and that changes have occurred regarding his schedule.

So far, that page does not include the clarification and note about his Prop G calendar. Here's our suggestion to Mayor Lee. Just post both calendars and don't place the burden on the public to file a request for the Prop G daily schedule.

The old version used to read "Mayor Lee's Calendar" and most folks would think that's his official calendar, right? 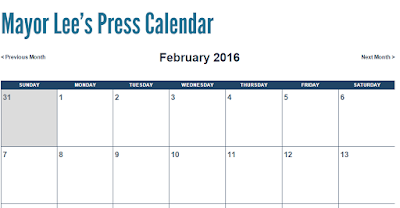 Mayor Lee now shares only his press calendar and we're waiting to see when his staff inserts the information about how to obtain his real calendar of events and meetings. We'll update on this once our complaint is head at the SOTF.