Open govt laws in San Francisco require members of the Board of Supervisors and other public officials to release their texts, upon request to citizen journalists and the public. Our recent request for all texts for January 2016 of the ten supervisors we're allowed to contact, related to their official City duties, produced some curious replies.

First, Eric Mar, failed to reply to our request for text messages.

Second, here are the replies from other supervisors. London Breed's office said she "does not keep or maintain any text messages." 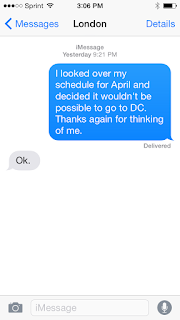 Norman Yee's office shared his texts and among them was one apparently from Breed. 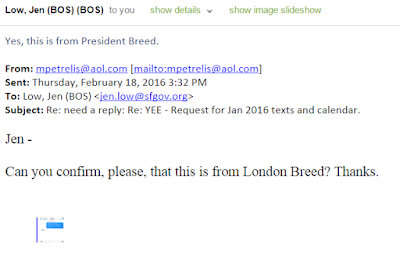 This is the confirmation that it is a text from Breed we received from Jen Low in Yee's office. Seems Breed's texts are kept by her colleagues.

Third, here's what others offices said. Malia Cohen's staff replied that she "does not have any responsive messages to your request." Mark Farrell's staffer wrote he "doesn’t have any texts for the month of January." Katy Tang wrote, "What I sent you was all that I had that was responsive to both your texts and calendar requests." She apparently didn't text about City matters last month. Aaron Peskin also says he didn't text last month.

Fourth, John Avalos is a prolific texter and we modified our request to him for only his texts with journalists. He sent so many texts, and we're not complaining since we love public records, they take up three folders! Read them. Part one, two and three need eyeballing.

After Avalos, Yee is the next most prolific texter and his texts are here, followed by the three texts released by Campos' office.

We don't believe Breed, Cohen, Farrell, Kim, Peskin and Tang didn't use any texts last month as part of their duties, and Mar is blowing off our request, so we've filed a complaint with the Sunshine Ordinance Task Force asking them to investigate.

More on that as the complaint is processed.
Posted by Unknown at 1:35 PM